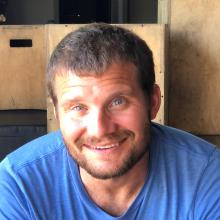 Coach Nate is head honcho at High Five Fitness. He and his wife, Emily, started the gym in May of 2012 and they have been leading our community towards a healthier lifestyle ever since.

Nate has donned the name "coach" for many years.  He got his start as a high school football coach in 2003, which he continued for 10 years. Nate is a compassionate coach that genuinely cares about each and every athlete.  He has a calm and welcoming demeanor with just the right touch of humor.   He is a natural teacher and leads by example, constantly striving for improvement.

In high school, Nate competed in football, basketball, and track.  During and after college, he did a little running, a little lifting, and a pick-up game of basketball here and there, but nothing really consistent.  When Nate was in his mid-20s he started to feel lethargic, achy, and just overall crappy; so, he decided he needed a CHANGE!   A friend introduced him to CrossFit and Nate hasn’t looked back since.

Coach Nate loves to challenge his body to the limits and appreciates how humbling CrossFit can be.  It’s hard to believe it now, but he was a beginner at one time too.  Ask him to tell you the story of the first time he tried an overhead squat!

When he is not at the gym, Nate is a family man.  You will find him hanging out with is lovely wife or chasing one if his three young boys.  He enjoys doing all sorts of fun things with his boys: fishing, golfing, biking, swimming, reading, and hanging out with friends.

Nate's first business was a catering service called Hogzilla.  He still likes to the bring the huge grill out for a potlock every now and again.  Nate is also a math teacher at East Lansing High School.